Portugal's Cancelo positive for Covid-19, out of Euro 2020

Portugal's Joao Cancelo has tested positive for Covid-19 and is out of Euro 2020, the defending champions' federation announced on Sunday.

Denmark midfielder Christian Eriksen remained in hospital and was in stable condition on Sunday, after collapsing during his side's Euro 2020 opening match with Finland and being given CPR on the pitch on Saturday, the Danish football association said. Eriksen, 29, collapsed suddenly in the 42nd minute of the match while running near the left touchline after a Denmark throw-in.

Denmark midfielder Christian Eriksen remained in hospital and was in stable condition on Sunday, after collapsing during his side's Euro 2020 opening match with Finland and being given CPR on the pitch on Saturday, the Danish football association said.

Former captain Michael Vaughan feels that preparing green tops for the five-match Test series against India following the disappointing show against New Zealand will do England more harm than good in the long run.

Quetta Gladiators' batsman Faf du Plessis suffered a concussion in a freak fielding accident after colliding with teammate Mohammad Hasnain during the Pakistan Super League match against the Peshawar Zalmi in Abu Dhabi on Saturday.

Selectors have got good back-ups for WTC final: Ross Taylor

Star batsman Ross Taylor feels New Zealand have shown their bench strength with an impressive performance in the second Test against England and the selectors will have plenty of back-up options when they pick the team for the World Test Championship final against India.

Eriksen's former cardiologist says he had no history of heart concerns

Denmark midfielder Christian Eriksen, who was hospitalised after collapsing during his side's Euro 2021 opener against Finland on Saturday, had no prior heart issues during his time with Premier League club Tottenham Hotspur, his former cardiologist said. Eriksen, 29, collapsed while running near the left touchline after a Denmark throw-in and was given life-saving cardiac massage treatment on the pitch

Nicolas Mahut and Pierre-Hugues Herbert became the first French pair to win their home Grand Slam twice when they defeated Kazakhs Alexander Bublik and Andrey Golubev 4-6 7-6(1) 6-4 in the men's doubles final at Roland Garros on Saturday.

Will keep fighting till the very end, Unadkat on snub by selectors

Ignored by the national selectors for yet another tour despite a stellar performance in the last edition of the Ranji Trophy, Saurashtra’s left-arm pacer Jaydev Unadkat has vowed that he “will keep fighting till the very end.” 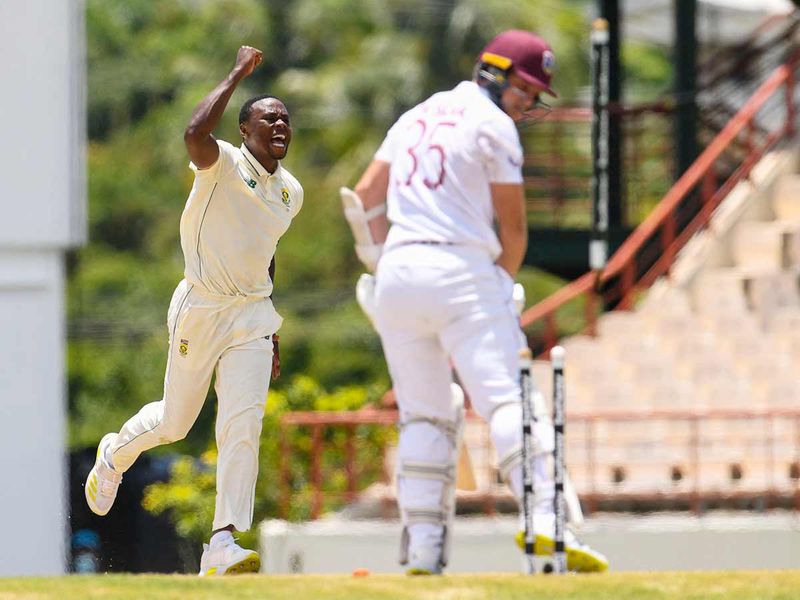 Cricket|: South Africa's fast bowler Kagiso Rabada took five wickets as they cruised to victory over West Indies by an innings and 63 runs before lunch on day three of the first test in Saint Lucia on Saturday. West Indies followed their paltry first innings score of 97 by being bowled out for 162 in reply to South Africas 322, as the tourists' seamers took advantage of a helpful wicket that had variable bounce and plenty of seam movement. Roston Chase, batting in an unfamiliar number four position, top-scored for the home side with a well-played 62, before he was bowled by left-arm spinner Keshav Maharaj (2-23). No-one else managed more than 14 in the innings. Rabada returned figures of 5-34 in West Indies second innings after fellow seamer Lungi Ngidi impressed with 5-19 in the first. "It was a collective effort by the side. There has been a lot of planning and there was a massive effort from us," new South Africa captain Dean Elgar said at the post-match presentation. "I had asked the guys to score big hundreds and to take five wickets and we had three of those accolades in this match. "We bowled brilliantly and it was great to see our batting unit pass 300 as we have been struggling of late." The result will provide plenty of food for thought for the hosts ahead of the second and final test that starts at the same venue on Friday. "They are quality bowlers, but we didn't bat as well as we could have," West Indies captain Kraigg Brathwaite said. "Second test we just have to bat better, it's as simple as that." "I thought as a bowling group we did well. Jayden Seales, in his first game, I thought he was magnificent. He's a special talent. But they all put in a great effort." The 19-year-old Seales, playing in his second ever first class match, used his raw pace and accuracy to claim 3-75.

Anastasia Pavlyuchenkova came close to claiming a maiden Grand Slam title in her 52nd appearance in the main draw of a major, but after Saturday's French Open final she said she was ultimately betrayed by her own body.

Krejcikova, who edged out the injured Russian Anastasia Pavlyuchenkova 6-1, 3-6, 6-4 in just under two-hours to clinch her first major singles crown, was fittingly presented with the Coupe Suzanne-Lenglen by Czech-born American Martina Navratilova.

Denmark coach Kasper Hjulmand said several of his players were too overwhelmed with emotion to finish their opening Euro 2021 match against Finland on Saturday, after teammate Christian Eriksen collapsed on the pitch and was rushed to the hospital.

French Open 2021: Not my best day out there, says Rafael Nadal

Rafael Nadal was out-of-position for much of the four-hour 11-minute semifinal encounter. He was scrambling in his backyard. And, try as he did, imparting more spin, moving his opponent around, the 13-time champion couldn’t push Novak Djokovic back to that precise crook where he was stranded on Friday night. 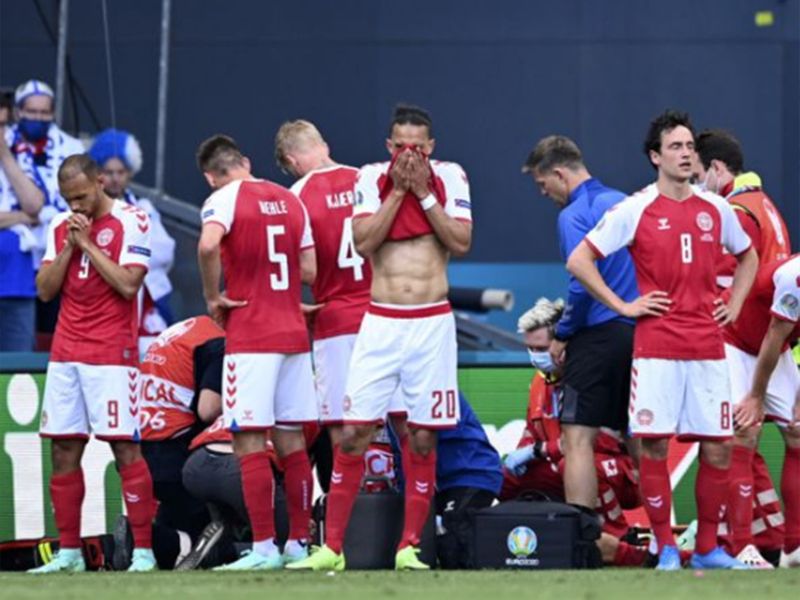 Euro 2020: Eriksen's collapse during Denmark, Finland match reminds us of how fragile life really is

Football|: Dubai: In the end, the result just did not matter. In fact, many felt that the game should not have even resumed. There are more important things in life than football – such as, life itself. And the world almost witnessed the tragic loss of one, but for the incredibly quick actions of players and paramedics. Denmark’s Christian Erkisen suffered a heart attack on the pitch and collapsed, and if we’re being honest and judging by the pictures on TV and reactions from the players and the fans, we all feared the worst. Referee, Anthony Taylor immediately realized the seriousness of the horrific incident and stopped play and signaled for the medics to rush on to the pitch and resuscitate the 29-year-old Inter Milan midfielder. The most frightening moment was seeing them desperately give Eriksen chest compressions in a bid to restart his heart. It was all too much for some on the pitch but the Danish team bravely formed a shield around their stricken talisman and protect him from the eyes of the media and the world watching on. It took an eternity for news to eventually filter in that the former Tottenham player, who had since been stretchered off and rushed to hospital, had regained consciousness and was even talking. It was the news we all prayed we would hear. Tough night Denmark coach Kasper Hjulmand said: “It’s been a tough night. We are all reminded of what the most important thing in life is – to have valuable relationships, people we’re close to, our family and our friends. You can’t play a game with such feelings – there were players out there who were emotionally exhausted.” The fact that the match was allowed to resume, having been suspended for 90 minutes, did not feel right at all. Respect ought to have been paid to what we had all witnessed, not least to Eriksen himself, and the match should have been postponed until another day when everyone was ready again. In the end, Denmark’s Schmeichel fumbled at a header from Pohjanpalo and it proved the winner for Finland. The keeper would have normally saved that effort with his eyes shut while Hjolberg saw his tame penalty saved. Clearly, both these players and others did not have their minds on the game and as a result the Danes lost their opener but again, the result just did not matter anymore. Our hopes and prayers are with Eriksen and his family and we all wish he makes a full and speedy recovery.

Novak Djokovic listed his semifinal win over Rafael Nadal at the top of the best matches he has played in Roland Garros. The world No.1 also enumerated it among the top-three matches he has been engaged in across the tennis landscape. Djokovic is shooting for a 19th major title, which would put him one behind Roger Federer and Nadal, and also a second title at Roland Garros to become the first man in over 50 years to win all four Slams twice.

Christian Eriksen, who collapsed during Denmark's Euro 2021 opener on Saturday, is a creative midfielder who made his name at Tottenham Hotspur before moving to Inter Milan and helping the Nerazzurri end their 11-year wait for a Serie A title.

Romelu Lukaku scored twice as Belgium confirmed their status as one of the favourites for Euro 2021 with a confident 3-0 victory over Russia on Saturday.